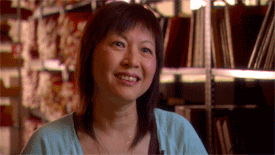 Cangioli started her career in public relations and publications with a non-profit organization in Hong Kong. She went on to set up her own company in the 1980s organizing international conferences and exhibitions in the Asia-Pacific region.  Cangioli moved to San Francisco in 1988.  She became a student of Khyentse Rinpoche in 1994 and was the Treasurer of Siddhartha’s Intent Western Door (SIWD) from 1996 to 2001.  She was a founding director of  Khyentse Foundation and has been serving as Executive Director since its inception in 2001. Cangioli graduated with honors from the University of Hong Kong with a Bachelor of Arts degree in English Literature.